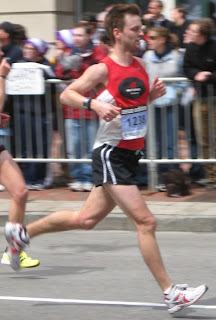 Greg Wieczorek was introduced to running at a very early age – as a child he joined every sports team he had access to, including his school's cross country running team. Running was the sport where Greg enjoyed the most success, and each year he would narrow his focus until age 14 when he was down to two individual sports: tennis and running. The only time Greg Wieczorek ever got his name in his tennis club’s monthly newsletter was for winning the 3000m at the Ontario Indoor Track & Field Championships in the Boys 15&Under age group. That was a big clue for Greg that maybe he should concentrate on running.

Greg Wieczorek grew up in the small town of Dorchester, Ontario, about 15 minutes east of London in Southwestern Ontario. His high school running career had more setbacks than accolades, but Greg made some great friends and had the fortune of being coached by some of the best in the region, including Doug Whistance – coach of Canadian 1500m record holder and Olympic 5th place finisher Kevin Sullivan, and Dr. David Bailey – Canada’s first ever sub 4-minute miler.

In Fall of 2000, Greg Wieczorek went off to Queen’s University to pursue his Bachelor of Commerce degree. After placing 7th at the Canadian Junior Track & Field Championships that summer, Greg had developed patella femoral syndrome in his knee and was forced to sit out his first potential cross country season. Greg was lured by some of the many vices that come with being away from home for the first time, and by Thanksgiving weekend he had already put on his Freshman 15! That was pretty much the beginning of the end of his Varsity career. Greg ran just enough to legitimately have "Member of Cross-Country and Track Team" on his resume when applying for jobs with the Big 4 accounting firms.

Within a few months of working on Bay Street in Toronto, Greg had ballooned up to 180lbs – 40lbs over his fighting weight! Once Greg Wieczorek obtained his Chartered Accountancy designation, he decided it was time for a lifestyle change. Greg moved back to his hometown of London, Ontario to seek a healthier work/life balance and shortly thereafter joined a local running clinic put on by John Ferguson of Runner's Choice.

In spring of 2006, Greg Wieczorek attempted his first marathon. Having battled through shin pain for the previous few weeks, he was forced to step out at km 17 and ask a passer-by if he could borrow their cell phone to call his dad to pick him up. Although dejected, Greg was determined to not let the past 5 months of getting up at 6:30am on a Sunday morning go to waste, and maintained his cardio fitness on the bike and elliptical at the local gym.

After being off running for almost 3 months while his stress fracture healed, Greg got himself back in shape that fall to run a 1:19:55 half marathon. In spring of 2007, Greg decided to give the marathon another go, and was very pleased with his 2:55 effort. Greg's initial goal was to just run a marathon to say he had run one, but now his new goal was to say he had run the Boston Marathon. That summer a new girl joined the running clinic who caught his eye – he couldn’t quit now that Maura had joined! That fall of 2007, Greg had improved on his first marathon attempt with a 2:52, but Maura didn’t exactly have the same luck, walking much of her marathon debut to finish with a 4:17. 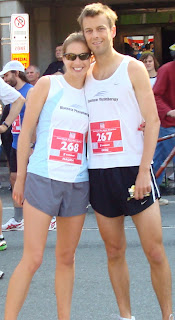 That winter a couple grizzled marathon veterans from the city, Rod Henning and Jim Burrows, invited Greg to tag along with them while they trained for the 2008 Boston Marathon. Greg thought he was out of his league with these guys, but just focused on getting in the miles, staying healthy, and the finish time would take care of itself. Those guys were great mentors to Greg, and he owes most of what he knows now to them. They introduced Greg to a plethora of training literature, and he read everything he had time for.

Since Greg Wieczorek's first Boston Marathon of 2:48 in 2008, he has continued to train harder and harder, methodically building off of previous training cycles. Greg has applied a similar logic when writing his wife Maura’s training schedules. Their progression to-date has been as follows:


Greg attributes their continued improvement over this period to training smart and remaining healthy. They have applied certain training techniques learned from some of the world’s most renowned coaches, and this has positioned them to toe the start line of each race with the objective of running a personal best. Greg Wieczorek now wants to expand his focus to help others maximize their potential.
Newer Post Older Post Home

"The greatest achievement is to outperform yourself."
Denis Waitley